- A Polity on the Brink 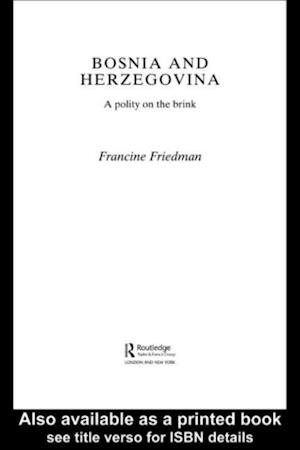 Emerging from communism in the early 1990s, the new state of Bosnia and Herzegovina was immediately embroiled in devastating ethnonationalist conflict. Now an international protectorate, the choices of its elites may well propel Bosnia either to a stable future, integrated into an expanding European entity, or to a future filled with insecurity, conflict, and adversity. This volume assesses current conditions in Bosnia, as well as the prospects for stability in a country torn between nationalistic elites on the one hand and the desires of important regional actors for control of Bosnia on the other, with a fractious international community overseeing the matter. Friedman controversially denies that the wars of Yugoslavia's dissolution are a necessary product of ancient ethnic hatreds, contending that Bosnia and Herzegovina was once the quintessentially multiethnic, multireligious community and could be again. Containing chapters on the country's history, economics, international relations and politics, this book provides social scientists with an accessible overview of contemporary Bosnia and Herzegovina.