Books of Hosea and Micah in Hebrew and Greek 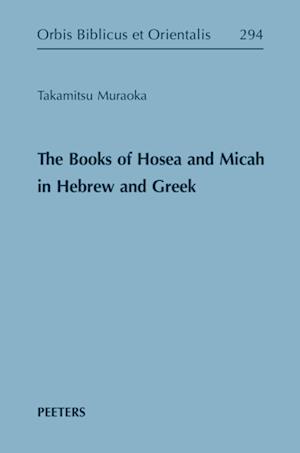 This is a verse-by-verse, text-critical study of two important books out of the Minor Prophets. An English translation by the author is provided alongside its Hebrew original as found in Biblia Hebreaica. The Septuagint text studied is the edition prepared by Ziegler. The main purpose of the monograph is not to discover evidences which could be valuable for reconstructing the original Hebrew text of these books, but to read the LXX as a Greek document of its own, not merely as a translation. Much attention has been directed to a whole range of linguistic issues relating to the Greek and Hebrew grammar and lexicography. Ancient fragments found in the Judaean Desert and Qumran caves of these books in Hebrew and Greek have also been looked at. The book of Hosea has been published in the series La Bible d'Alexandrie, but not that of Micah yet. Unlike this series we have paid only minimum attention to documents such as patristic commentaries from which one can learn how the LXX was interpreted without reference to its Semitic original.