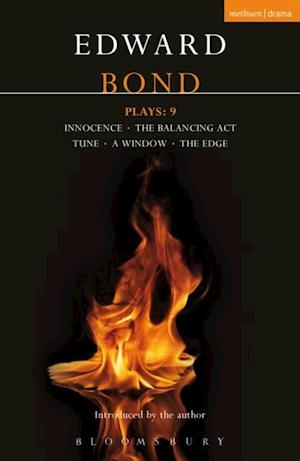 Edward Bond Plays:9 brings together recent work by the writer of the classic stage plays Saved, Lear, The Pope's Wedding, and Early Morning. The volume comprises five new plays and a comprehensive introduction by the author exploring theories of writing and theatre. Innocence is the final play in The Paris Pentad, a dramatic epic stretching from the 1940s to the end of the twenty-first century. The conflicts at the heart of civilisation have erupted into violence, and the characters in Innocence must seek refuge in each other to escape the cruelty of war.Window, Tune, Balancing Act and The Edge are plays commissioned by The Big Brum Theatre. With themes of drug use, violence, suicide, and mother-son relations, the plays focus on problems directly aimed at modern youth culture. Ideally suited to students, performers and particularly university showcases, they are short, interesting and powerful pieces. This edition also includes some of Bond's previously unpublished Theatre Poems.