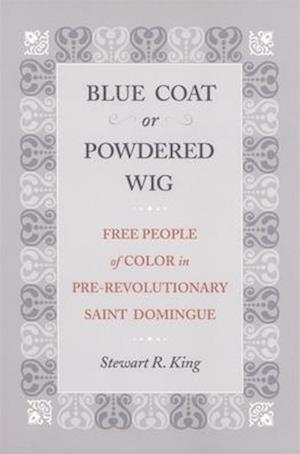 By the late 1700s, half the free population of Saint Domingue was black. The French Caribbean colony offered a high degree of social, economic, and physical mobility to free people of color. Covering the period 1776-1791, this study offers the most comprehensive portrait to date of Saint Domingue's free black elites on the eve of the colony's transformation into the republic of Haiti.

Stewart R. King identifies two distinctive groups that shared Saint Domingue's free black upper stratum, one consisting of planters and merchants and the other of members of the army and police forces. With the aid of individual and family case studies, King documents how the two groups used different strategies to pursue the common goal of economic and social advancement. Among other aspects, King looks at the rural or urban bases of these groups' networks, their relationships with whites and free blacks of lesser means, and their attitudes toward the acquisition, use, and sale of land, slaves, and other property.

King's main source is the notarial archives of Saint Domingue, whose holdings offer an especially rich glimpse of free black elite life. Because elites were keenly aware of how a bureaucratic paper trail could help cement their status, the archives divulge a wealth of details on personal and public matters.

Blue Coat or Powdered Wig is a vivid portrayal of race relations far from the European centers of colonial power, where the interactions of free blacks and whites were governed as much by practicalities and shared concerns as by the law.