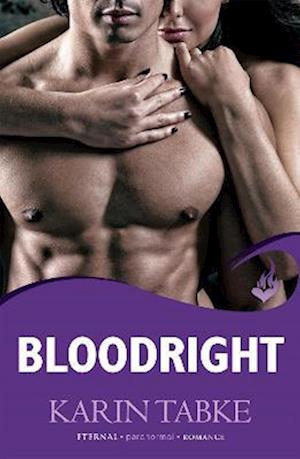 Karin Tabke, author of The Chronicles of Katrina, continues her exciting, passion-filled Blood Moon Rising trilogy with Bloodright, a sizzling paranormal romance, perfect for fans of Sylvia Day's Renegade Angels, Laurell K. Hamilton's Anita Blake and J. R. Ward's Black Dagger Brotherhood.The coming of the Blood Moon will lead two Lycan packs into war, spur two rival brothers into conflict, and spark an act of vengeance so evil that its effects will be felt for generations. And one woman stands at the centre of it all... After years of waiting, the Blood Law is at last avenged. Lycan Alpha Lucien Mondragon takes revenge on his brother Rafael. Lucien is poised to slay Rafael's life mate, the Lycan/Slayer half-breed Falon - but cannot complete the kill. For Falon's mystical powers and fiery nature awaken a heart Lucien thought long dead. Instead of ending her life, Lucien defiantly marks Falon as his own, tormenting his brother to insanity and spurning Rafael's blood thirst for his own revenge...What happens next? Don't miss the sexy, thrilling conclusion to the Blood Moon Rising trilogy in Blood Vow or see where it all began in Blood Law.

Forfattere
Bibliotekernes beskrivelse The steamy second book in the sensational Blood Moon Rising trilogy from the author of The Chronicles of Katrina.