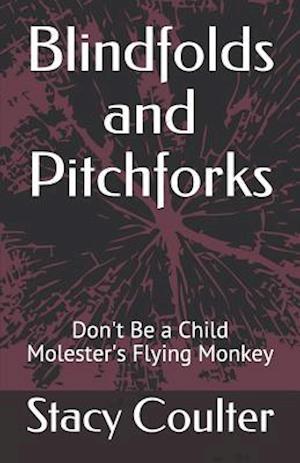 Child sexual abuse is a major health epidemic in the world, with one in four girls and one in five boys becoming victims of sexual assault before turning 18. One of the most common and disturbing aspects of this crime is that, if victims do find the courage to disclose their abuse, they are often blamed, shamed, shunned and punished for telling. It's time to start standing behind victims of this crime and making sure that child molesters face the punishments that fit this heinous crime. People like to believe that child sexual abuse does not affect them personally or that they do not know any victims or perpetrators. It feels safe to believe that they would detect someone capable of molesting and raping children. But the fact is, approximately 90% of victims are abused by somebody known and trusted by or within the family. Shattering the myths about these crimes and speaking out is the key to changing the daunting statistics surrounding child sexual abuse.Blindfolds and Pitchforks details the story of my emotionally abusive partner who molested my daughter over a period of years and the subsequent re-victimization that we experienced as a result of turning him in. Our story is not rare; it is the norm.