- The Quest for Britishness, Britain, Britons, Britishness and The British 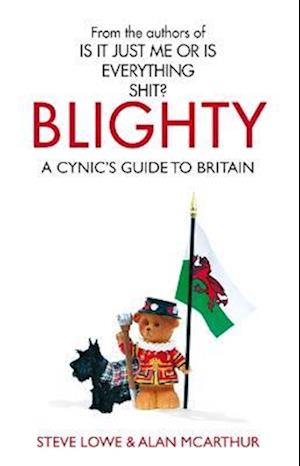 Britain. What's that all about then?Having skewered modern life and culture in the bestselling Is it Just Me or is Everything Shit?, Steve Lowe and Alan McArthur set out to uncover the deep dark truth about Britain - its history, its myths and its people. Over the course of a year they endure the Last Night of the Proms and search for a couple of pissed dragons under a hill in Wales. They witness Scotland rising again (a bit), encounter terrifying Europhobe ladies in Surrey and lose the will to live in Gibraltar. They also meet a lot of druids. Hilarious, provocative and filled with fascinating facts, Blighty offers a brilliant, alternative vision of Britain - the island in the Atlantic that some people call Britain.

Forfattere
Bibliotekernes beskrivelse * A very funny and insightful look at Britain and Britishness from the bestselling authors of IS IT JUST ME OR IS EVERYTHING SHIT? Integrated: 100, int b/w photos