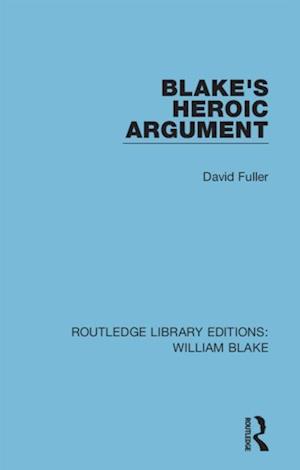 First published in 1988, this book is a study of all Blake's work in illuminated printing. It traces in particular, the development of his ideas on politics, religion, sexuality, and the imagination. There are substantial sections on some of Blake's best-known works, including the Marriage of Heaven and Hell, and the Songs of Innocence and Experience, and full critical essays on the Four Zoas and Jerusalem. The book describes the historical contexts of Blake's work, and sets it in relation to the political controversies of his age as these are reflected in the writings of Burke, Paine and Mary Wollstonecraft. It discusses the relationships of text and design in Blake, the characteristic verbal textures and rhythms of his longer poems, some influences on his thought, and developing structure of his personal myth and its relationship to other mythologies. The opening chapter discusses areas of fundamental disagreement with some of the main approaches to Blake whilst the final chapter discusses literary theory and the practice of criticism, arguing for an open and explicit involvement of personal experience and values and a more creative use of form in critical writing.