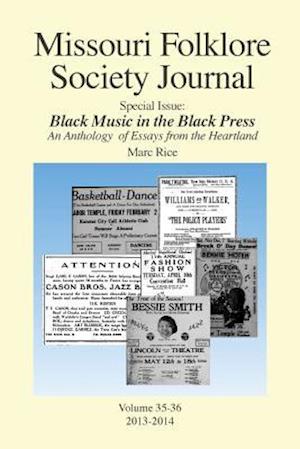 When Reconstruction ended in 1877, tens of thousands of African Americans migrated from the Old South to the Midwest.  Within a decade, they had established dozens of towns with churches, halls, and musical groups--and dozens of weekly newspapers which recorded both musical performances and attitudes toward a complicated set of musical traditions.

Black Music in the Black Press begins with Reconstruction and ends with the Great Depression.

Ethnomusicologist Marc Rice has combed huge collections of newspapers, from which he culled scores of editorial reviews, dozens of advertisements, and hundreds of  articles, organizing them in ways which make clear the conflicts and changes. By keeping the focus on the articles themselves, he has brought readers first-hand accounts of the tastes and values black newswriters like William Kelly or music experts like Martha Broadus-Anderson debated and promulgated a century ago.  And more, he has given current readers what they need to see, the stars: McCabe & Young, Walker and Williams, Scott Joplin, Sissieretta Jones, Ada Brown, Billy Kersands, W.H. Handy, Bennie Moten, Count Basie, Bill Bojangles, Irene and Vernon Castle, Bessie Smith, Louis Armstrong--and many many more.

From Witchita to Kansas City to Chicago, Indianapolis, Cleveland,  and Detroit, black editors praised or excoriated minstrel shows, cakewalks, and "coon" songs.  Later, they debated the value of "ragtime," blues, and jazz. Black performers won audiences with spectacular minstrel shows, created their own musical comedies and operas, modulated spirituals into sorrow songs, developed orchestras and dance clubs.  Newsmen like George Knox of the Indianapolis Freeman, "an ex-slave with progressive ideas," balanced what they recognized as musical genius against the potentially demeaning effect of racist farce.  Some saw "refined minstrelsy" in the McCabe & Young Minstrels, for example or praised the "droll humor" of Walker and Williams' Mr. Lode of Koal as "clean, hearty, romping mirth."

Yet, though black musicians proved their talents in a myriad ways, some reviewers seemed to value them insofar as they conformed to Eurocentric standards, reserving praise for "classically trained" black pianists and condemning popular comics for creating  "noise" and "trash."

In eight chapters, organized chronologically and featuring articles from both large and smaller newspapers,  Black Music in the Black Press presents these multiple perspectives, tracking the ways in which tastes changed over the half century between 1880 and 1935.   As the decades passed, minstrel shows faded. Ragtime, blues, and "jass" blossomed. Venues grew, as well. The first World War brought further changes--including recognition that European audiences responded positively to black music.  The Great Depression, and Prohibition further changed the ways in which black music was presented and evaluated. And finally, the impact of new technologies--of radio and studio recording--on black musicians was carefully assessed by writers in the black press.

Black Music in the Black Press is a treasure trove.