- Disease Interventions, Empire, and the Government of Species 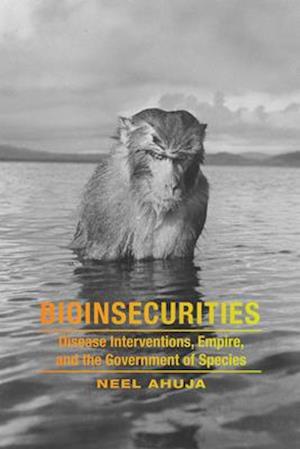 In Bioinsecurities Neel Ahuja argues that U.S. imperial expansion has been shaped by the attempts of health and military officials to control the interactions of humans, animals, viruses, and bacteria at the borders of U.S. influence, a phenomenon called the government of species. The book explores efforts to control the spread of Hansen's disease, venereal disease, polio, smallpox, and HIV through interventions linking the continental United States to Hawai'i, Panama, Puerto Rico, Cuba, Congo, Iraq, and India in the twentieth and twenty-first centuries. Ahuja argues that racial fears of contagion helped to produce public optimism concerning state uses of pharmaceuticals, medical experimentation, military intervention, and incarceration to regulate the immune capacities of the body. In the process, the security state made the biological structures of human and animal populations into sites of struggle in the politics of empire, unleashing new patient activisms and forms of resistance to medical and military authority across the increasingly global sphere of U.S. influence.

Forfattere
Bibliotekernes beskrivelse In Bioinsecurities Neel Ahuja shows how twentieth-century U.S. imperial expansion was dependent on controlling the spread of disease through the transformation of humans, animals, bacteria, and viruses into living theaters of warfare and securitization. 19 illustrations