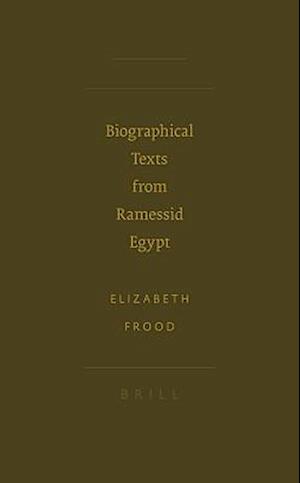 The Ramessid period in Egypt (ca. 1290-1075 B.C.E.) corresponds to the Late Bronze Age, a time of great change both in Egypt and the Near East. This period of empire, dominated by the figure of Ramesses II, witnessed crucial developments in art, language, and religious display. Biographical Texts from Ramessid Egypt offers insights into these cultural transformations through the voices of forty-five priests, artists, civil officials, and military men who served under the kings of the Nineteenth and Twentieth Dynasties. Sixty-five biographical texts, which were inscribed in tombs, on statues and stelae in temples, and exceptionally on temple walls, give details of their careers and character. The metrically arranged translations are introduced by descriptions of the texts' monumental contexts and, where possible, summaries of the careers of their owners. The volume provides an introduction to the historical background of the Ramessid period, drawing together key themes and interpretive issues raised by the texts and their contexts. These include the representation of relationships to deities and the king, the thematization of the priestly life, and implications of changes in the texts' media, including new decorative programs of nonroyal tombs. This integration of text with context sheds light on the meaning of biographical writing in ancient Egypt as a whole. Paperback edition is available from the Society of Biblical Literature (www.sbl-site.org)