- In a Class by Himself Special Edition: Includes 16 Extra Pages of Fun! (Special) 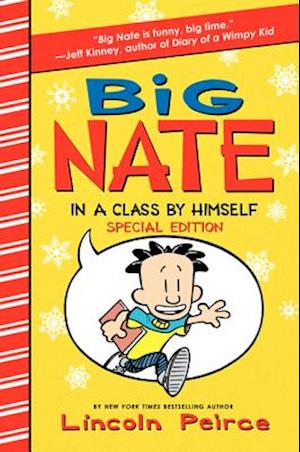 This awesome special edition of Big Nate: In a Class by Himself includes an extra 16 pages full of fun, with laugh-out-loud holiday comix, mix 'n' match gift grabs, and Nate-orious wish lists

Big Nate fans won't want to miss getting their hands on the first Big Nate novel, now jam-packed with extra activities and comics It's the same great story, now even better

For fans of the hilarious Diary of a Wimpy Kid series: Get ready to meet Big Nate In the first novel in the New York Times bestselling series, Big Nate is in a class by himself

Nate knows he's meant for big things. REALLY big things. But things don't always go your way just because you're awesome. Nate barely survives his dad's toxic oatmeal before rushing off to school--minus his lunch. He body slams the no-nonsense principal. He accidentally insults his least favorite teacher, the horrifying Mrs. Godfrey (aka Godzilla). And school has barely started

Trouble always seems to find him, but Nate keeps his cool. He knows he's destined for greatness. A fortune cookie told him so.

Get your reader into this beloved series with Big Nate: In a Class by Himself, the perfect book for anyone who's ever been to middle school.