Bibliography of Imperial, Colonial, and Commonwealth History since 1600

indgår i serie The Royal Historical Society Bibliography-The History of Britain, Ireland, And the British Overseas 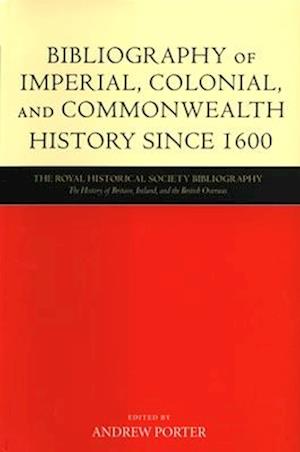 This volume is designed to further the study of Spanish culture in the broad sense of the network of symbolic systems through which social groups construct and negotiate a sense of identity or identities. The emphasis is on culture as a set of practices rather than as a corpus of texts. The aim is to introduce readers to current theoretical debates in a range of disciplines, as well as to inform them about specific areas of twentieth-century Spanish culture. The foursections on 'Ethnicity and Migration', 'Gender', 'Popular Culture', and 'The Local and the Global' cover ethnography, music, TV, advertising, popular literature, medical discourse, film, posters, museums, and urban development.The twentieth century witnessed an unprecedented growth of research and publication on the history of Britain's empire, the Commonwealth, and British expansion overseas. Historical work by area specialists has transformed the state of knowledge concerning colonial North America, India, the Caribbean, sub-Saharan Africa, South and South-East Asia, the Pacific, and Australasia. Much has been written about Britain's interests and presence in areas and societies neverformally subjected to British rule, such as Latin America, and the Middle and Far East. Most recently, a preoccupation with the reciprocal impact of overseas expansion and colonial possessions on Britain itself has produced a rapidly growing historiography. Publication on this scale has made itvirtually impossible for anyone either to keep track of the results or to follow up particular interests. Britain's overseas history has never been well supplied with comprehensive bibliographical aids, and, despite extensive public interest in the subject, the position has steadily worsened. Following the recent Oxford History of the British Empire, this volume is therefore designed to provide a general source of reference and bibliographical guidance, at once wide-ranging, up-to-date, andaccessible.

Forfattere
Bibliotekernes beskrivelse This interdisciplinary volume focuses on the ways in which cultural practices serve the purposes of identity formation. It introduces readers to a range of theoretical debates as well as informing them about specific areas of twentieth-century Spanish culture: ethnography, music, TV, advertising, popular literature, medical discourse, film, posters, museums, and urban development.The 20th century witnessed an unprecedented growth of research and publication on the history of Britain's empire, th