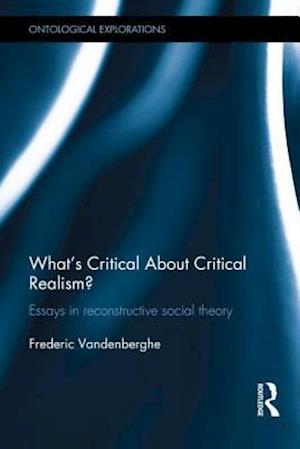 What's Critical About Critical Realism?: Essays in Reconstructive Social Theory draws together 4 major articles that are situated at the intersection of philosophy and sociology. Preceded by a general presentation of Bhaskars work, critical realism is used to reconstruct the generative structuralism of Pierre Bourdieu, warn about the dangers of biocapitalism, theorize about social movements and explore the hermeneutics of internal conversations.Together, the essays form a logical sequence that starts with a search for a solid conception of social structure through a realist critique of Bourdieus rationalist epistemology, proceeds to an ideology critique of posthumanism through an investigation of Actor-Network Theory, extends critical realism to social movements through an investigation of the constitution of collective subjectivities and engages in a sustained dialogue with Margaret Archer through an attempt to reconnect hermeneutics and pragmatism to critical realism. The result is an ongoing dialogue between British critical realism, French historical epistemology, German critical theory and American pragmatism. As suits a collection of essays in social theory, this book will address a broad audience of sociologists, philosophers, social psychologists and anthropologists who are interested in contemporary social theory at the cutting edge. Academics and advanced students who relate to critical realism and critical theory, epistemology and philosophy of the social sciences, hermeneutics and pragmatism, or anyone else who follows the work of Roy Bhaskar, Pierre Bourdieu, Bruno Latour or Margaret Archer will find a keen interest in some of the theoretical questions the book raises.