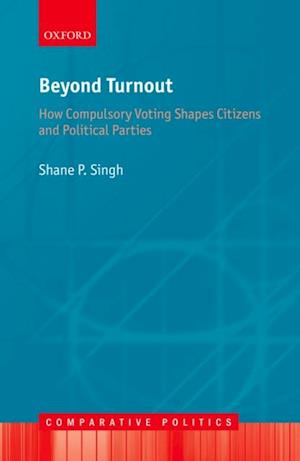 Compulsory voting is widely used in the democratic world, and it is well established that it increases electoral participation. Beyond Turnout: How Compulsory Voting Shapes Citizens and Political Parties assesses the effects of compulsory voting beyond turnout. Singh first summarizes the normative arguments for and against compulsory voting, provides information on its contemporary use, reviews recent events pertaining to its (proposed) adoption andabolition, and provides an extensive account of extant research on its consequences. He then advances a theory that compulsory voting polarizes behavior and attitudes, and broadens gaps in political sophistication levels, among those with negative and positive orientations toward democracy. Recognizing the impact ofmandatory voting on the electorate, political parties then alter the ways in which they seek votes, with mainstream parties moderating their platforms and smaller parties taking more extreme positions. Singh uses survey data from countries with compulsory voting to show that support for the requirement to vote is driven by individuals' orientations toward democracy. The theory is then comprehensively tested using: cross-national data; cross-cantonal data from Switzerland; and survey data fromArgentina. Empirical results are largely indicative of the theorized process whereby compulsory voting has divergent effects on citizens and political parties. The book concludes with a discussion of future directions for academic research, implications for those who craft electoral policy, andalternative ways of boosting turnout. Comparative Politics is a series for researchers, teachers, and students of political science that deals with contemporary government and politics. Global in scope, books in the series are characterised by a stress on comparative analysis and strong methodological rigour. The series is published in association with the European Consortium for Political Research. For more information visit: www.ecprnet.eu. The series is edited by Susan Scarrow, Chair of the Department of Political Science, University of Houston, and Jonathan Slapin, Professor of Political Institutions and European Politics, Department of Political Science, University of Zurich.