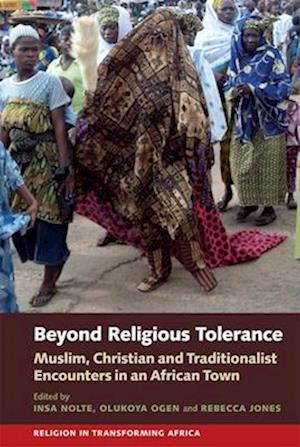 Since the end of the Cold War, and especially since 9/11, religion has become an increasingly important factor of personal and group identification. Based on an African case study, this book calls for new ways of thinking about diversity that go "beyond religious tolerance". Focusing on the predominantly Muslim Yoruba town of Ede, the authors challenge the assumption that religious difference automatically leads to conflict: in south-west Nigeria, Muslims,Christians and traditionalists have co-existed largely peacefully since the early twentieth century. In some contexts, Ede's citizens emphasise the importance and significance of religious difference, and the need for tolerance.But elsewhere they refer to religious boundaries in passing, or even celebrate and transcend religious divisions. Drawing on detailed ethnographic and historical research, survey work, oral histories and poetry by UK- and Nigeria- based researchers, the book examines how Ede's citizens experience religious difference in their everyday lives. It examines the town's royal history and relationship with the deity Sango, its old Islamic compounds and itsChristian institutions, as well as marriage and family life across religious boundaries, to illustrate the multiplicity of religious practices in the life of the town and its citizens and to suggest an alternative approach to religious difference. INSA NOLTE is Reader in African Studies, University of Birmingham, and Visiting Research Professor, Osun State University, Osogbo. OLUKOYA OGEN is Former Provost, Adeyemi College of Education, Ondo,Professor of History, Osun State University, Osogbo, and Visiting Senior Research Fellow, University of Birmingham. REBECCA JONES, Postdoctoral Research Fellow, University of Birmingham, is author of At the Crossroads: NigerianTravel Writing and Literary Culture in Yoruba and English, published by James Currey in 2019. All three editors worked on the ERC project 'Knowing Each Other: Everyday Religious Encounters, Social Identities and Tolerance in Southwest Nigeria'. Nigeria: Adeyemi College Academic Press (paperback)