- A Normative Account of the Collateral Legal Consequences of Conviction

indgår i serie Studies in Penal Theory and Philosophy 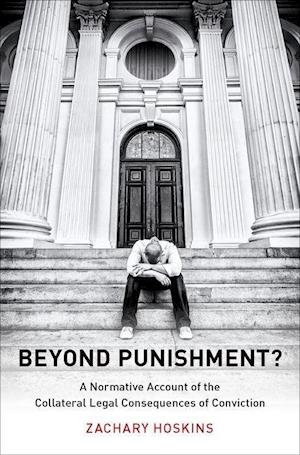 People convicted of crimes are subject to a criminal sentence, but they also face a host of other restrictive legal measures: Some are denied access to jobs, housing, welfare, the vote, or other goods. Some may be deported, may be subjected to continued detention, or may have their criminal records made publicly accessible. These measures are often more burdensome than the formal sentence itself. In Beyond Punishment?, Zachary Hoskins offers a philosophical examination of these burdensome legal measures, called collateral legal consequences. Drawing on resources in moral, legal, and political philosophy, Hoskins analyzes the various kinds of collateral consequences imposed in different legal systems and the important moral challenges they raise. Can collateral legal consequences ever be justified as forms of criminal punishment or as civil measures? Hoskins contends that,considered as forms of punishment, such restrictions should be constrained by considerations of proportionality and offender reform. He also argues that they may in a limited range of cases be permissible as risk-reductive civil measures. Whether considered as criminal punishment or civil measures, however,collateral legal consequences are justifiable in a far narrower range of cases than we find in current legal practice.Considering just how pervasive collateral legal consequences have become and their dramatic effects on offenders' lives, Beyond Punishment? sheds valuable light on whether these restrictive measures are ever morally justified.

Forfattere
Bibliotekernes beskrivelse In Beyond Punishment?, Zachary Hoskins offers a philosophical examination of the collateral legal consequences of conviction. Considering how pervasive collateral restrictions have become and the dramatic effects such restrictions have on offenders' lives, Hoskins examines whether these extended measures of punishment are ever morally justified.