Benefits, Burdens, and Prospects of the American Community Survey

- Summary of a Workshop 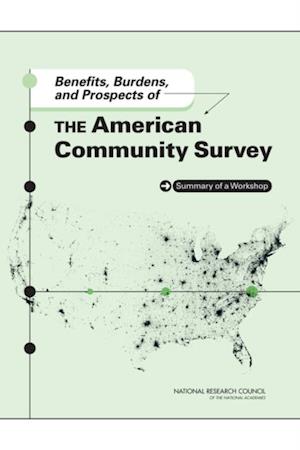 In June 2012, the Committee on National Statistics (sponsored by the U.S. Census Bureau) convened a Workshop on the Benefits (and Burdens) of the American Community Survey (ACS)---the detailed demographic and economic survey that began full-scale data collection in 2005 and that replaced the traditional 'long form' in the 2010 census. ACS data are used by numerous federal agencies to administer programs, yet the ACS only moved from abstraction to reality for most users in 2010, when the first ACS estimates for small areas (based on 5 years of collected data) were made available. Hence, the workshop marked the opportunity to develop a picture of the breadth of the nonfederal user base of the ACS---among them, the media, policy research and evaluation groups (that distill ACS results for the media and broader public), state and local agencies, businesses and economic development organizations, and local and regional planning authorities---and to gather information on users' experiences with the first full releases of ACS products.In addition to covering innovative uses of the information now available on a continuous basis in the ACS, the workshop gave expression to the challenges and burdens associated with the survey: the time burden places on respondents, the challenges of explaining and interpreting estimates with increased levels of variability, and the privacy and confidentiality implications of some of the ACS content. Benefits, Burdens, and Prospects of the American Community Survey: Summary of a Workshop provides a factual summary of the workshop proceedings and hints at the contours of the ACS user constituency, providing important input to the ongoing review and refinement of the ACS program.