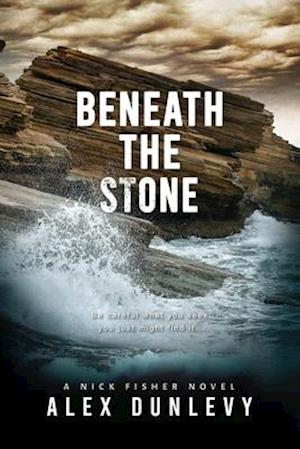 This is the second novel in the Nick Fisher series of intelligent crime thrillers set on the island of Crete. Nick is a former DCI with The Met in London who escaped to Crete following the collapse of his marriage, the death of his father and his forced resignation from the police service. Now he finds himself being drawn into helping the Greek police with serious crimes involving foreigners or tourists.

In Beneath the Stone, Nick Fisher agrees to work with Leo's feisty, young protégée Náni Samarákis, but he doesn't bargain on facing death or finding love or hurting his son again.

A missing person case morphs into a grisly murder when a body part is found in the sea. But who would carve up the body and why? Were they the killers or was it that mysterious, hooded man, if he even exists? And why does the tracker dog lead them to a stone wall?

In a dark village with a tortured past where resentment festers, Nick and Náni must work together, despite their differences, to peel back layers of complex relationships, some leading back to wartime Crete.

Only then will they find out why a young man had to die.