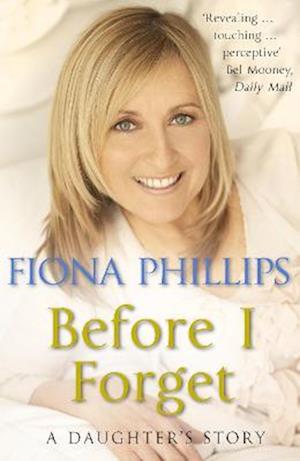 Fiona Phillips is one of our best-loved television presenters. Well-known for being warm, chatty and down to earth, she attended her local comprehensive in Southampton before studying English in Birmingham. For over twelve years she presented GMTV, during which time she interviewed some of the most famous and influential people on the planet, from film stars to royalty, politicians to local heroes. But in August 2008 Fiona announced that she was to quit the job she loved, revealing that her father, Phil, had been diagnosed with Alzheimer's just a year after her mother had died of the same disease and that she had decided to devote more time to him and to her family. Before I Forget is a wonderfully honest account of growing up in the 1960s and 70s within a complex family. During her childhood her father could sometimes be distant and demanding which both saddened her and drove her to succeed, her mother always the devoted wife and the steady heart of the family. When Fiona lands the job at GMTV she revels in how proud they are of her achievement. When her mother and then her father succumb to Alzheimer's we share in Fiona's sadness as she movingly describes watching them fade away, one moment interviewing George Clooney the next taking a call from Pembrokeshire Social Services to say that her mother had wandered away from her care home.Before I Forget is an extraordinary book which will resonate with Fiona's millions of fans and the millions of people who day-by-day are going through, or have gone through, the same experiences.