Beasts Beneath the Flesh

- Book One Eye of the Serpent

indgår i serie Eye of the Serpent 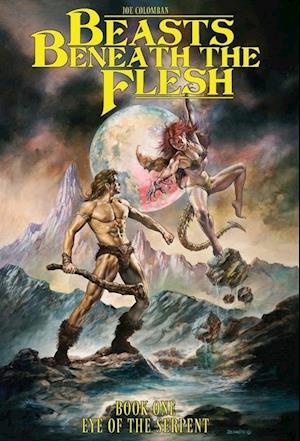 Beneath the bloodstained moon, the only thing more insane than the people are the cosmic horrors they call gods.

Modernization is fast approaching. The only escape is a desert where sword & sorcery reign supreme, locked in an age of antiquity by its eldritch serpentine overlords. But, the outside world does not intend for it to stay that way. A disillusioned legionnaire and a bloodthirsty barbarian travel east. One to escape the life he knew, the other for revenge. Rebels struggle with their hard-won freedom while a half-breed fights to quell them before his masters do. A pirate takes a job beyond her depth in the hopes of undermining the serpent-men's power. And a sorceress drives herself to the brink of madness in a bid for it.

By fate or happenstance, they converge on something far greater than any of them. Their fates hopelessly intertwined, they march forward. Yet no matter how lightly they tread, the chaos each leaves in their wake threatens to swallow the others in this tale of blood, bronze, sorcery, and gunpowder.