- A Reexamination of the Name Command of the Decalogue 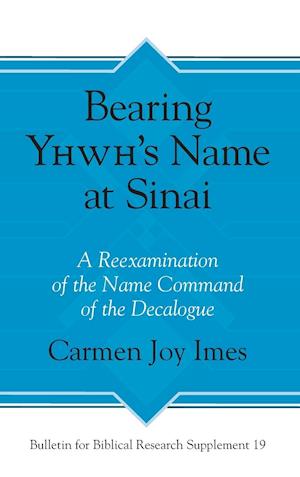 The Name Command (NC) is usually interpreted as a prohibition against speaking Yhwh's name in a particular context: false oaths, wrongful pronunciation, irreverent worship, magical practices, cursing, false teaching, and the like. However, the NC lacks the contextual specification needed to support the command as speech related. Taking seriously the narrative context at Sinai and the closest lexical parallels, a different picture emerges-one animated by concrete rituals and their associated metaphorical concepts. The unique phrase ns' shm is one of several expressions arising from the conceptual metaphor, election as branding, that finds analogies in high-priest regalia as well as in various ways of claiming ownership in the Ancient Near East, such as inscribed monuments, the use of seals, and the branding of slaves. The NC presupposes that Yhwh has claimed Israel by placing Yhwh's own name on her. In this light, the first two commands of the Decalogue reinforce the two sides of the covenant declaration: "I will be your God; you will be my people." The first expresses the demand for exclusive worship and the second calls for proper representation. As a consequence, the NC invites a richer exploration of what it means to be a people in covenant with Yhwh-a people bearing his name among the nations. It also points to what is at stake when Israel carries that name "in vain." The image of bearing Yhwh's name offers a rich source for theological and ethical reflection that cannot be conveyed nonmetaphorically without distortion or loss of meaning.

Forfattere
Bibliotekernes beskrivelse Explores the Name Command in the Decalogue by examining its expression in Jewish rituals and their associated metaphorical concepts.