- The Unbelievable Story of Major Charles Carpenter and Rosie the Rocketer 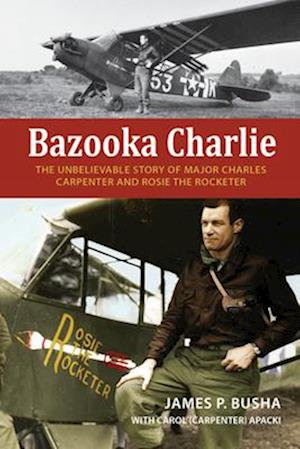 Major Charles Carpenter made headlines during the Second World War when he affixed six bazookas to his tiny Piper L-4 observation plane and began attacking German tanks. "Bazooka Charlie" and his plane "Rosie the Rocketer" were profiled in a variety military and civilian publications, including the iconic Stars & Stripes. Beyond his battlefield exploits, Carpenter was an extremely talented, complex, and moody character. The major was a high school educator in the civilian world, teaching history and coaching football. His constant quest for self-discovery and fulfillment put tremendous strain on his marriage but helped him battle through Hodgkin's lymphoma, which was discovered in his neck in 1945. Charles Carpenter died in 1966, leaving behind a confusing legacy for those who knew only of his wartime exploits, but also for those who knew the man, even for his family. This revealing biography of the famous pilot was made possible through the collaboration of noted aviation author and magazine editor Jim Busha, and Carpenter's daughter Carol Apaki. Along with memories of her father in his postwar years, Carol provided a treasure trove of wartime correspondence between Charles and his wife, Elda Carpenter.