Batrachomyomachia (Battle of the Frogs and Mice) 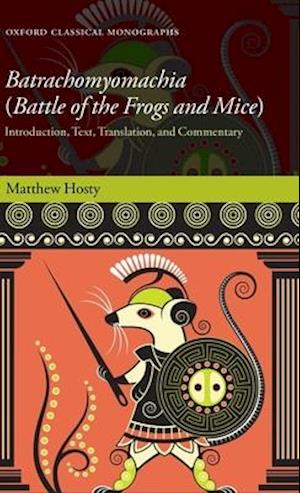 The Batrachomyomachia (Battle of the Frogs and Mice) is a Hellenistic pastiche of Homer's Iliad which was often attributed to Homer himself by later commentators. As a parody of epic battle narrative it is quite unlike anything else that survives in full from antiquity; however, despite its popular and influential reception throughout much of history from the Roman period onwards, the advent of the twentieth century saw it largely dismissedand overlooked as a curio. This volume presents a new critical edition of the poem, comprising an introduction, Greek text and English verse translation, and line-by-line commentary, which aims to rehabilitate its image and return it to the centre of scholarly attention by mapping out the wide range of metaliterary jokes, references, and parodies concealed within the apparently simple and childish story. The Greek text is entirely new, based on a fresh collation of the nine most important early manuscripts as well as onthe work of previous editors. All verses which appear in these manuscripts are included - those which do not belong in the main text are presented separately at the foot of each page - and are accompanied by a full apparatus criticus and a new facing verse translation, which aims to strike a balancebetween precision and readability. A comprehensive introduction thoroughly orients readers in the poem's historical and literary context, covering its (highly uncertain) date and disputed authorship, its relationship with the wider genre of 'parody', its language and metre, and its reception and influence up to the present day, among other topics. The commentary forms the largest part of the volume, offering detailed discussion of linguistic, stylistic, and thematic questions, as well asguiding readers through the complex network of references to Homer and Hellenistic poetry and breaking down the textual problems for which the poem is so notorious.

Forfattere
Bibliotekernes beskrivelse This new critical edition of the Batrachomyomachia (Battle of the Frogs and Mice) seeks to return the poem to the centre of scholarly attention, presenting a new Greek text alongside an English verse translation, along with a comprehensive introduction and a line-by-line commentary dealing with linguistic, stylistic, and thematic questions.