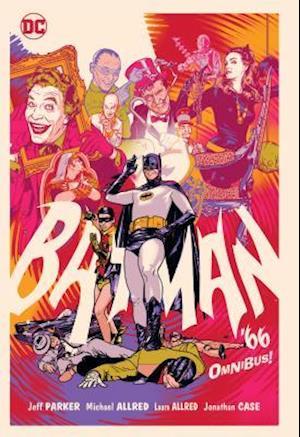 The continuing adventures of America's fun-loving, action-packed pop-culture icons from the classic Batman TV series Along with the returning regular cast of rogues plaguing Batman, Robin, Batgirl and Commissioner Gordon--the Joker, Riddler, Penguin, Catwoman, Mr. Freeze, Egghead and Olga, Queen of the Cossacks--Gotham City must contend with new appearances from the rest of Batman's colorful villains-- Harley Quinn, the Scarecrow, Bane, Poison Ivy and Two-Face--none of whom ever graced your Bat-TVs Collected for the first time in one collection, the entirety of Batman and Robin's adventures can be read at one Bat-time, including the story behind Harlan Ellison's outline and adapted comic for the series' "lost episode." Featuring a cast of creators, including Jeff Parker, Michael Allred, Laura Allred, Jonathan Case and others, Batman '66 Omnibus collects Batman '66 #1-30 and Batman '66: The Lost Episode #1.