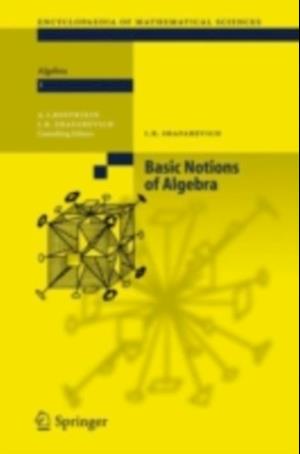 22. K-theory 230 A. Topological X-theory 230 Vector bundles and the functor Vec(X). Periodicity and the functors KJX). K(X) and t the infinite-dimensional linear group. The symbol of an elliptic differential operator. The index theorem. B. Algebraic K-theory 234 The group of classes of projective modules. K , K and K of a ring. K of a field and o l n 2 its relations with the Brauer group. K-theory and arithmetic. Comments on the Literature 239 References 244 Index of Names 249 Subject Index 251 Preface This book aims to present a general survey of algebra, of its basic notions and main branches. Now what language should we choose for this? In reply to the question 'What does mathematics study?', it is hardly acceptable to answer 'structures' or 'sets with specified relations'; for among the myriad conceivable structures or sets with specified relations, only a very small discrete subset is of real interest to mathematicians, and the whole point of the question is to understand the special value of this infinitesimal fraction dotted among the amorphous masses. In the same way, the meaning of a mathematical notion is by no means confined to its formal definition; in fact, it may be rather better expressed by a (generally fairly small) sample of the basic examples, which serve the mathematician as the motivation and the substantive definition, and at the same time as the real meaning of the notion.