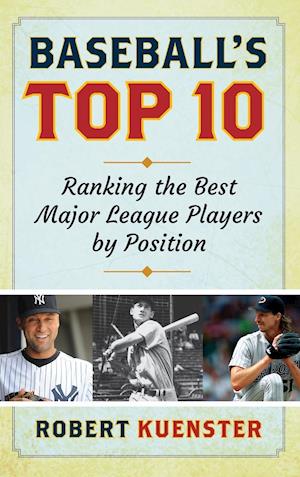 Comparing major league players has always been a popular topic among baseball fans. Debating the strengths and weaknesses of such greats as Joe DiMaggio and Ted Williams, Babe Ruth and Hank Aaron, Willie Mays and Mickey Mantle, or Tom Seaver and Greg Maddux continues to stir up controversy among fans eager to champion their heroes.In Baseball's Top 10, Bob Kuenster has compiled a ranking of the game's best players by position, highlighting the achievements of nearly 300 individuals. In addition to the top 10, Kuenster includes Honorable Mentions-players who were considered but didn't make the final list-and Dishonorable Mentions-players who were left off the rankings due to alleged steroid and performance enhancing drug use. Drawing upon original interviews conducted by the author, this ranking reveals the best players in major league history as seen through the eyes of former players, managers, and announcers. Player entries include biographical information, individual achievements, stats, and quotes. Organized by position-first base, second base, third base, shortstop, left field, center field, right field, catcher, designated hitters, multi-position players, right-handed starting pitchers, left-handed starting pitchers, and closers-280 outstanding players made the cut as the most elite pitchers, hitters, and fielders in MLB history.Baseball's Top 10 features interviews with some of baseball's greatest personalities-including players who have since passed, such as Al Lopez, Bob Feller, Stan Musial, Lou Boudreau, Andy Pafko, Ron Santo, Harry Caray and Harry Kalas. With over 50 photographs and a comprehensive list of suggested titles for further reading, this book is sure to interest baseball fans and historians who love to debate the many outstanding players who have appeared in the major leagues.