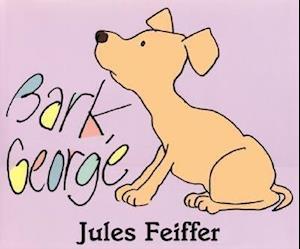 From acclaimed author-illustrator Jules Feiffer, Bark, George is a hilarious, subversive story about a dog who can't . . . bark This picture book geared for the youngest readers is perfect for those who love Mo Willems's Pigeon series.

When George's mother tells her son to bark, George goes "Meow," which definitely isn't right because George is a dog. When she asks him again, he goes "Oink." What's going on with George? Readers will delight at the surprise ending

"Feiffer's characters are unforgettable...the pictures burst with the sort of broad physical comedy that a lot of children just love. It all makes for a witty, laugh-out-loud play on the old favorite about the old lady who swallowed a fly." -ALA Booklist *(Starred Review)*

And so is his mother, who repeats, "Bark, George." And George goes, "Quack, quack."

What's going on with George? Find out in this hilarious new picture book from Jules Feiffer.