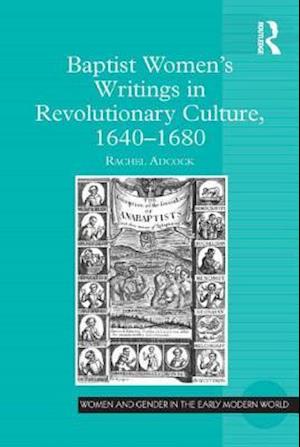 Although literary-historical studies have often focused on the range of dissenting religious groups and writers that flourished during the English Revolution, they have rarely had much to say about seventeenth-century Baptists, or, indeed, Baptist women. Baptist Women's Writings in Revolutionary Culture, 1640-1680 fills that gap, exploring how female Baptists played a crucial role in the group's formation and growth during the 1640s and 50s, by their active participation in religious and political debate, and their desire to evangelise their followers. The study significantly challenges the idea that women, as members of these congregations, were unable to write with any kind of textual authority because they were often prevented from speaking aloud in church meetings. On the contrary, Adcock shows that Baptist women found their way into print to debate points of church organisation and doctrine, to defend themselves and their congregations, to evangelise others by example and by teaching, and to prophesy, and discusses the rhetorical tactics they utilised in order to demonstrate the value of women's contributions. In the course of the study, Adcock considers and analyses the writings of little-studied Baptist women, Deborah Huish, Katherine Sutton, and Jane Turner, as well as separatist writers Sara Jones, Susanna Parr, and Anne Venn. She also makes due connection to the more familiar work of Agnes Beaumont, Anna Trapnel, and Anne Wentworth, enabling a reassessment of the significance of those writings by placing them in this wider context. Writings by these female Baptists attracted serious attention, and, as Adcock discusses, some even found a trans-national audience.