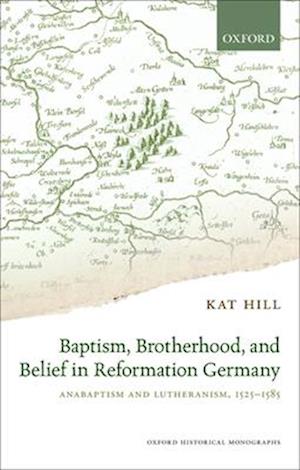 When Martin Luther mounted his challenge to the Catholic Church, reform stimulated a range of responses, including radical solutions such as those proposed by theologians of the Anabaptist movement. But how did ordinary Anabaptists, men and women, grapple with the theological and emotional challenges of the Lutheran Reformation? Anabaptism developed along unique lines in the Lutheran heartlands in central Germany, where the movement was made up of scattered groupsand did not centre on charismatic leaders as it did elsewhere. Ideas were spread more often by word of mouth than by print, and many Anabaptists had uneven attachment to the movement, recanting and then relapsing. Historiography has neglected Anabaptism in this area, since it had no famous leaders anddoes not seem to have been numerically strong. Baptism, Brotherhood, and Belief challenges these assumptions, revealing how Anabaptism's development in central Germany was fundamentally influenced by its interaction with Lutheran theology. In doing so, it sets a new agenda for understandings of Anabaptism in central Germany, as ordinary individuals created new forms of piety which mingled ideas about brotherhood, baptism, the Eucharist, and gender and sex. Anabaptism in this region wasnot an isolated sect but an important part of the confessional landscape of the Saxon lands, and continued to shape Lutheran pastoral affairs long after scholarship assumed it had declined. The choices these Anabaptist men and women made sat on a spectrum of solutions to religious concerns raised by theReformation. Understanding their decisions, therefore, provides new insights into how religious identities were formed in the Reformation era.

Forfattere
Bibliotekernes beskrivelse Deals with the historically neglected Anabaptist movement in Reformation Germany, exploring how ordinary Anabaptists interpreted and interacted with Lutheran theology and how their beliefs shaped religious identity in the Reformation era. 7 black and white illustrations