Bangkok a Cultural and Literary History 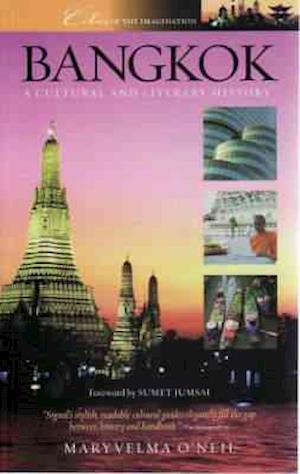 Bangkok stands out as a place of extraordinary allure. Beginning as a floating city in a lush tropical setting, known to foreigners as the "Venice of the East", centuries later, its majestic Grand Palace and glittering Buddhist temples would compete for the horizon with Western chimneystacks. Chinese immigration and investment and Indian commerce have also visibly marked the cityscape, where great ethnic diversity is represented in the world-famous Thai cuisine. The capital of the Kingdom of Thailand, founded and shaped by Chakri monarchs, was altered by nationalistic monuments in new public spaces after the 1932 coup ended absolute rule. Development plans of the 1960s and arriviste money of the 1980s gave rise to a jungle of skyscrapers on its alluvial plain.Serious urban challenges now beset this Asian Tiger that hovers between First World and Third. Fascinating pockets of traditional indigenous life percolate under a surface of modernity, while fragments of intense beauty and sensation abound in the labyrinthine lanes and alleys that replaced canals. Bangkok bears the longest city name in the world: forty-three syllables.Locals have shortened it to Krung Thep which means City of Angels. Maryvelma O'Neil explores their city - rich in art, history, royal ceremony and tradition. This is a city of royalty, Buddhism and trade - Grand Palace of the King of Siam; tinkling temple bells; spirit houses; citadel of independence from Western colonialism; the world's last absolute monarch; boom and bust; sex supermarket. It features amphibious life; houseboats, junks and shacks; boat poems; the original Siamese twins; traditional Thai homes; a "stream of poison"; the Oriental Hotel.It is a city of immigrants and foreigners - Chinatown; Brahminic rituals and Hindu shrines; missionaries and merchants; Joseph Conrad and Somerset Maugham; Anna Leonowens and King Mongkut; Italian architects and artists; the American Silk King; Thai cuisine.

Forfattere
Bibliotekernes beskrivelse Bangkok stands out as a place of extraordinary allure. This book is a cultural and literary history of Thailand's capital, tracing its development from a centre of religious and royal tradition into a modern megalopolis. 30 b&w drawings; maps