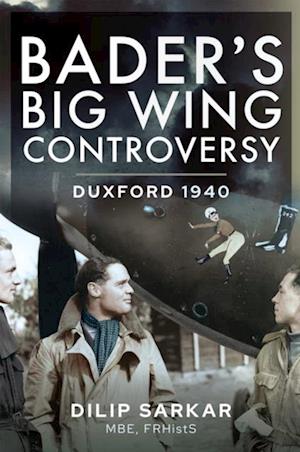 Group Captain Sir Douglas Bader remains one of the most famous RAF fighter pilots to date, perhaps even the most famous of all, thanks to Paul Brickhill’s best-selling 1950s yarn Reach for the Sky and Dany Angel’s box office hit of the same name, starring Kenneth Moore.Bader, a graduate of the RAF College Cranwell and a professional, career officer, was a gifted sportsman and aerobatic pilot – but headstrong. After a crash that led to the amputation of both of his legs, the Second World War was this man of action’s salvation: passing a flying test, he returned to the RAF, first flying Spitfires with 19 Squadron at Duxford. In due course he was posted to 222 Squadron as a flight commander, seeing action over Dunkirk.Already newsworthy, the swashbuckling, legless, fighter pilot was also a favorite of his Station Commander, Wing Commander A.B. ‘Woody’ Woodhall, and, more importantly, his 12 Group Air Officer Commanding, Air Vice-Marshal Leigh-Mallory. In short order, therefore, Bader was soon elevated to Acting Squadron Leader and given command of 242 Squadron, a Canadian Hurricane squadron which he led throughout the Battle of Britain.On 30 August 1940, 12 Group was requested to reinforce 11 Group and intercept a raid on an aircraft factory at Hatfield. This was Bader and 242 Squadron’s first experience of a mass German raid, and many combat claims were subsequently filed. The events that day led Bader to submit a report arguing that the more fighters he had at his disposal, the greater would be the execution of the enemy that could be achieved. It was a concept that received support from Leigh-Mallory, who recognised an opportunity for 12 Group to play a greater part in what was clearly an historic battle. Leigh-Mallory authorised Bader to lead three, then five, squadrons – a controversial formation that came to be known as the ‘Duxford Wing’ or ‘Big Wing’.In Bader’s Big Wing Controversy, Dilip Sarkar not only explores the full story of the people and events that led to the creation of the ‘Big Wing’ at Duxford, he also fully investigates the part that its men and machines played in the Battle of Britain story. Whilst Bader was not personally intending disloyalty, as such, to his Air Officer Commander-in-Chief, Air Chief Marshal Sir Hugh Dowding, he was, as the latter once commented, ‘the cause of a lot of the trouble’. In his burning desire to propel 242 Squadron and himself, its leader, into the forefront of the action, the newsworthy acting squadron leader found himself used by darker forces, men with axes to grind and personal ambitions to further.