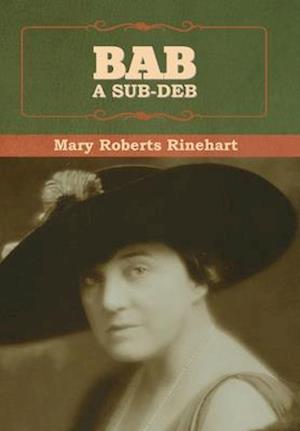 Bab, only twenty months younger than her sister, the official debutante, rebels against her treatment by her family. Set during the pre-World War I era, when women's roles were rapidly changing, Bab determines to assert her independence through this series of misadventures and mysteries. . . .

"I am writing all of this as truthfully as I can. I am not defending myself. What I did I was driven to, as any one can see. It takes a real shock to make the average Familey wake up to the fact that the youngest daughter is not the Familey baby at seventeen. All I was doing was furnishing the shock. If things turned out badly, as they did, it was because I rather overdid the thing. That is all. My motives were perfectly ireproachible." - Bab

And this Bab feels through all of her hilarious and at times dangerous adventures to prove she is not just a Sub-Deb. Written by that master of mystery and humor, Mary Roberts Rinehart, Bab is a delightful combination of both.