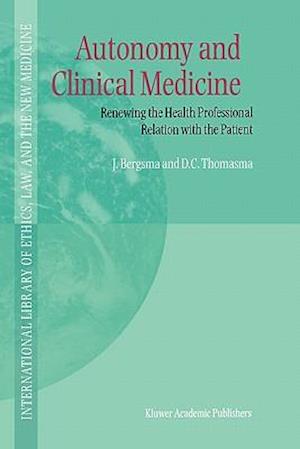 This book arises from a two-fold conviction. The first is that autonomy, despite recent critiques about its importance in bioethics and philosophy of medicine, and the traditional resistance of medicine to its "intrusion" into the doctor-patient relation, is a fundamental building block of an individual's identity and mechanisms for dealing with illness, disease, and incapacity. As such it is an essential component in the health care professional's armamentarium employed to bring about healing. Furthennore, it functions in a similar way to assist the health professional in his or her relations to the sick and injured. The second conviction follows from the fITst. Autonomy is far more complex than appears from the philosophical use of the concept. In this conviction we join those who have criticized the over-reliance on autonomy in modem, secular bioethics originating in the United States, but gaining ascendancy in other cultures. This critique relies on appeals to the richer contexts of persons' lives. Elsewhere the contemporary critique of autonomy appears in a variety of alternative ethical models like narrative ethics, casuist ethics, and contextualism. Indeed, postmodern criticism of all bioethics argues that there is no defensible foundation for claims that one ought to respect autonomy or any other principle as a way of ensuring that one is ethical.