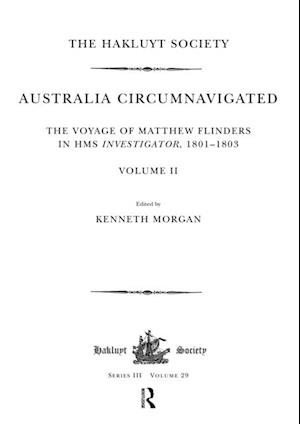 This two-volume work provides the first edited publication of Matthew Flinders's fair journals from the circumnavigation of Australia in 1801-1803 in HMS Investigator, and of the 'Memoir' he wrote to accompany his journals and charts. These are among the most important primary texts in Australian maritime history and European voyaging in the Pacific. Flinders was the first explorer to circumnavigate Australia. He was also largely responsible for giving Australia its name. His voyage was supported by the Admiralty, the Navy Board, the East India Company and the patronage of Sir Joseph Banks, President of the Royal Society. Banks ensured that the Investigator expedition included scientific gentlemen to document Australia's flora, fauna, geology and landscape features. The botanist Robert Brown, botanical painter Ferdinand Bauer, landscape artist William Westall and the gardener Peter Good were all members of the voyage. After landfall at Cape Leeuwin, Flinders sailed anti-clockwise round the whole continent, returning to Port Jackson when the ship became unseaworthy. After a series of misfortunes, including a shipwreck and a long detention at the Ile de France (now Mauritius), Flinders returned to England in 1810. He devoted the last four years of his life to preparing A Voyage to Terra Australis, published in two volumes, and an atlas. Flinders died on 19 July 1814 at the age of forty. The fair journals edited here comprise a daily log with full nautical information and 'remarks' on the coastal landscape, the achievements of previous navigators in Australian waters, encounters with Aborigines and Macassan trepangers, naval routines, scientific findings, and Flinders's surveying and charting. The journals also include instructions for the voyage and some additional correspondence. The 'Memoir' explains Flinders' methodology in compiling his journals and charts and the purpose and content of his surveys. This edition has a substantial introduction