Attack at the Arena

indgår i serie Adventures in Odyssey: The Imagination Station 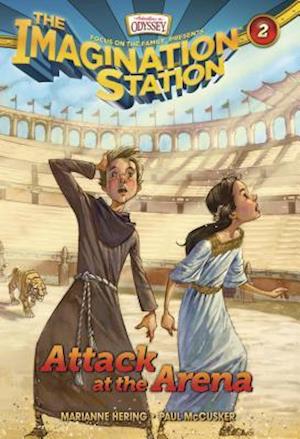 Patrick and Beth learn that Mr. Whittaker's fancy ring can be seen inside the Imagination Station but not outside of the machine. A mysterious letter leads the cousins to fifth-century Rome in search of a special cup that belongs to a monk. If found, the cup could keep the mysterious Albert out of prison.

At the Roman Colosseum, Emperor Honorius is hosting a gladiator battle in celebration of a war victory. Beth attends the event as the emperor's slave; Patrick attends as a monk's apprentice but is taken prisoner and sent to fight in the arena. During their adventure, the cousins meet Telemachus (a true historical figure), a monk who believes that fighting is wrong. Telemachus is willing to risk everything--even his life--to stop the killing. When the cousins return with the cup, they find that a third letter has been sent with more information about Albert's fate.

Forfattere
Bibliotekernes beskrivelse Lions and tigers and boars, oh my!
"Stop the fighting--in the name of Christ--stop!"
Cousins Patrick and Beth are off on their second Imagination Station adventure. Mr. Whittaker's mysterious invention takes them to ancient Rome, where they must find a special silver cup. Near the city gate, the cousins are separated when Beth is enslaved to the emperor and Patrick meets a wise monk named Telemachus. All three end up in the famous Roman arena. Telemachus wants to share an important message with the emperor. Beth wants to know how to get the cup. And Patrick just wants to escape with his life!
The key to adventure lies within your imagination! What to join Patrick and Beth on their adventures? Visit www.TheImaginationStation.com. You'll find out more fun facts about Vikings and the animals of Greenland. Plus you'll get the scoop on the next book, and much more!
Recommended for ages 7 and up
Flesch-Kincaid Grade Level: 2.3