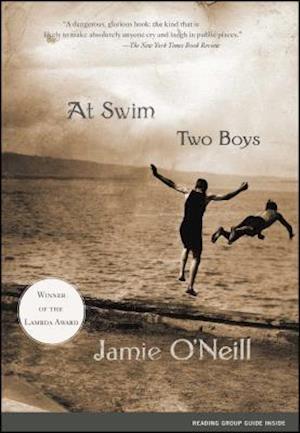 Praised as "a work of wild, vaulting ambition and achievement" by Entertainment Weekly, Jamie O'Neill's first novel invites comparison to such literary greats as James Joyce, Samuel Beckett and Charles Dickens. Set during the year preceding the Easter Uprising of 1916--Ireland's brave but fractured revolt against British rule--At Swim, Two Boys is a tender, tragic love story and a brilliant depiction of people caught in the tide of history. Powerful and artful, and ten years in the writing, it is a masterwork from Jamie O'Neill. Jim Mack is a na ve young scholar and the son of a foolish, aspiring shopkeeper. Doyler Doyle is the rough-diamond son--revolutionary and blasphemous--of Mr. Mack's old army pal. Out at the Forty Foot, that great jut of rock where gentlemen bathe in the nude, the two boys make a pact: Doyler will teach Jim to swim, and in a year, on Easter of 1916, they will swim to the distant beacon of Muglins Rock and claim that island for themselves. All the while Mr. Mack, who has grand plans for a corner shop empire, remains unaware of the depth of the boys' burgeoning friendship and of the changing landscape of a nation.

Forfattere
Bibliotekernes beskrivelse In the tradition of Salman Rushdie's "Midnight's Children" comes an astonishingly ambitious and resonant novel that transports readers to Dublin in the year preceding the Easter uprising--a pivotal time in Irish history and in the lives of two very young men from different backgrounds.