Astrology, Raising Spirits, Teleportation and Synchronicity in the Bible

- Vol.7 of 7 in the Psychic and Paranormal Phenomena in the Bible Series 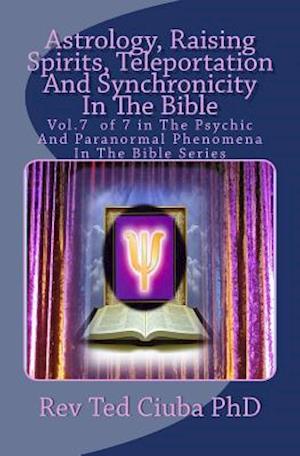 This volume 7 of 7 in the Psychic And Paranormal Phenomena In The Bible Series covers four distinct psychic gifts: astrology, raising spirits, teleportation, and synchronicity. ASTROLOGY: No spiritual adherent could not believe in astrology. Three astrologers - revered wise ones - journey from the East to celebrate Jesus' incarnation. They are the only humans in the world not directly connected with the family that know what's going on. Only an astrologer, or a society who believes in astrology, would attribute any subjective significance to a star, a star formation, or the movement of a star. They knew about it because they read it in the stars. Though, to be sure, it, like all the psychic arts, astrology is often mis-used, mis-presented, and mis-understood. Small wonder little good comes of it for the normal person. The psychical world is not constrained by the linear components of hard reality. RAISING SPIRITS: According to what the Bible teaches, even if it does not recommend it, the psychic phenomenon of raising spirits is certainly real. If the scene when King Saul calls up the dead Samuel through the medium at Endor proves anything, it proves that formerly embodied people can be called from their slumbers; that some people posses the ability to call them; and that those raised spirits can foretell the future. TELEPORTATION: The teleporter doesn't comply with the general boundaries separating subjective and objective reality. Sometimes the process can be hairy, as when "a form that had the appearance of a man" takes Ezekiel by a lock of his hair to Jerusalem. Sometimes it's more normal, as when Philip, his work done converting and baptizing a new follower into the controversial new religion, simply disappears; "the eunuch sees him no more" (Acts 8.39). He's spotted, without much fanfare, teaching in Azotus at the time. SYNCHRONICITY: Which works, because, in sacred mythology, everything occurs in synchronicity. For newbies in psychi-spiritual awareness, synchronicity seems like a novel and grand occurrence. Initiates, with the sight developed only slightly, see all events as the fulfillment of purposes, decrees, and destinies, interdependently co-orchestrated by HoloCosm, the individual dancing with the dancing partners that are God. The most fascinating story of synchronicity, whose primary action spans decades, is the story of Joseph, which involves greed, hatred, international relations, and the entire world. A chain of evil things befall Joseph, perpetrated in the start of it, by his own blood, his brothers. Yet God had a plan, and Joseph was instrumental in saving the entire Jewish race, back when they were just a large, already divided family. Every level of creation interdependently flows in the give and take of expansion and contraction. The universe breathes as a unit. The fate of galaxies is interdependent with the fate of the atom. All eternity is connected at every point to all eternity. Synchronicity is when we see it.