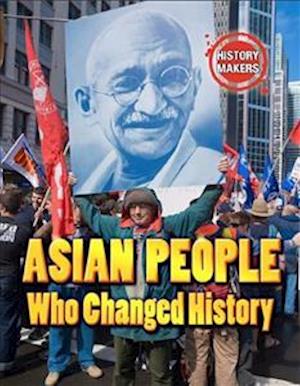 Find out about the actions of Asian history makers in this book, ranging from the extreme bloodshed of Genghis Khan and Mao Tse-Tung to the non-violent resistance of Gandhi, Sarojini Naidu and the Dalai Lama and the contemplation of Confucius and Buddha. Explore the lives of those who made their mark on history, from building empires to establishing new belief systems and from speaking out against injustice to climbing to the top of the world.The History Makers series looks at the lives of significant figures from the past and present, who, by their ideas and actions, affected the course of history in their own countries and across the world.

Forfattere
Bibliotekernes beskrivelse Learn all about the lives of Asian history-makers, from Genghis Khan and Mao Tse-Tung to Gandhi, Sarojini Naidu and the Dalai Lama, Confucius and Buddha. Black and white and colour photographs throughout