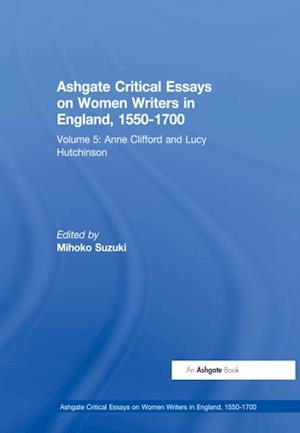 Until recently, Anne Clifford has been known primarily for her Knole Diary, edited by Vita Sackville-West, which recounted her steadfast resistance to the most authoritative figures of her culture, including James I, as she insisted on her right to inherit her father's title and lands. Lucy Hutchinson was known primarily as the biographer of her husband, a Puritan leader during the English Civil Wars. The essays collected here examine not only these texts but, in Clifford's case, her architectural restorations and both the Great Book which she had compiled and the Great Picture which she commissioned, in order to explore the identity she fashioned for herself as a property owner, matriarchal head of her family, patron and historian. In Hutchinson's case, recent scholars have turned their attention to her poetry, her translation of Lucretius and her biblical epic, Order and Disorder, to analyze her contributions to early modern scientific and political writing and to place her work in relation to Milton's Paradise Lost.