Arsenal a Backpass Through History

indgår i serie A Backpass Through History 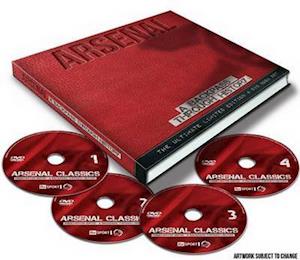 An insight into the unique journey of one the most famous soccer clubs in the world, highly illustrated and with four DVDs Follow the authoritative text charting a nostalgia-packed journey through Arsenal's evolution from its beginnings as a south London munitions factory team right through to the mighty Gunners and their ascent to the top, with some of the most talented players ever seen.This book offers player career retrospectives and in-depth statistical information together with a focus on the managers who have guided the club, including a special feature on Arsene Wenger.Four DVDs offer four hours of vintage Arsenal matches and profile some of The Gunners star players including John Radford, Alan Ball, Malcolm McDonald, Liam Brady, David O Leary, Tony Adams, and Thierry Henry. These DVDs are in PAL format."