- A Comprehensive Guide to the Battlefields. Part 2: Arras North 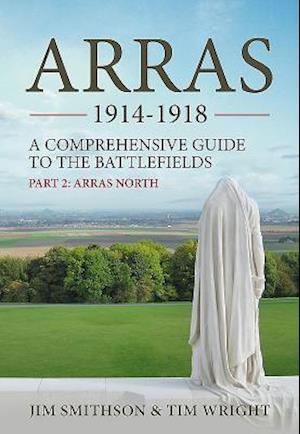 Arras is known by some as the forgotten battle, because of this it's not one of the most written about or visited First World War areas on the Western Front; in fact, it lacks the general awareness levels when compared to the iconic battlefields of the Somme or Passchendaele. Nevertheless, The Arras battlefields hold much to interest both the seasoned and curious visitor alike, with many visual reminders of the war over 100 years on.This guide is designed to both educate and guide the visitor around four years of conflict that the city of Arras and its surrounding area endured. Organised geographically in sectors to aid the visitor, all the major engagements of the war in the Arras area are described and locations chosen to enable the visitor to gain a greater understanding of the battle; from the French on the Lorette Ridge in 1914 & 1915, the British from 1916-18 and the Canadians on Vimy Ridge in 1917, north of the city, to the Australians at Bullecourt in the south, the visitor will find the battlefield described in detail. The guide uses key observation points to ensure that the visitor is correctly orientated to get a fuller understanding of the battles and the ground they were fought over. The visitor can for example stand on Observation Ridge, look towards the city of Arras and using the description of the battle and the detailed maps and photographs taken from that key location, gain a full understanding of the attack of 12th Division on the morning of the 9th April. A detailed modern map then allows the visitor to turn and move to one of the many cemeteries in the area and again be able to read a detailed description of what he or she can see.This is not a guide that will tell you where to go or give prescribed routes but by clearly marked key locations will allow the visitor to plan their own itinerary according to time, interest or inclination. Each location has photographs and a clear description of what can be seen and what happened at key moments of the war at that place. Advice is also given as to the accessibility (car, bicycle or on foot) for each location to aid the visitor when planning. Lavishly provided with maps and photographs, this guide will be the essential companion to anyone visiting the Arras battlefields and hopefully bring them back to the area again and again.This volume deals with the area south of the River Scarpe where the British attacked in April and May 1917, the Germans in March 1918 and then the Anglo-Canadian offensive leading to the end of the war.

Forfattere
Bibliotekernes beskrivelse A comprehensive visitor's guide to the First World War battlefields around Arras, south of the Scarpe, with descriptions of the battles, detailed maps and photographs. c 70 colour images & 40 maps