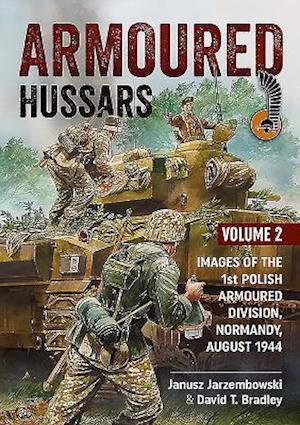 Armoured Hussars 2 provides a highly-illustrated account of the 1st Polish Armoured Division's baptism of fire in Normandy in August 1944, from Operations Totalise and Tractable to the victory at Falaise, culminating at the climactic battle on Mont Ormel - the site of this triumph was justly named 'A Polish Battlefield' by the Canadians. This album contains contributions written by the distinguished military author and Normandy veteran Ken Tout, who was recently awarded the Knight's Cross of the Order of Merit by the Republic of Poland for popularising the Polish soldiers of the Second World War. Serving as a young Sherman tank crewman in the Northamptonshire Yeomanry, Ken watched the Poles go in to action on 8 August and witnessed their savage baptism of fire.The album features many dramatic photographs and documents, numbering over 250, from the renowned Polish Institute and Sikorski Museum (PISM) as well as from the author's collection. It is also supplemented by eight pages of colour plates featuring divisional armour, uniforms, maps and a centre page-spread of a close-quarter action on Mont Ormel, based on the memoirs of a regimental commander. Illustrated by the renowned military artist, Peter Dennis, this depiction also features on the front cover.This book will appeal to all who have an interest in the Second World War and the Normandy Campaign, and is a fitting tribute to those Polish soldiers who fought so gallantly for Europe's freedom as part of the Allied Liberation Army and played a decisive role in the defeat of German forces in France at the Battle of the Falaise Pocket in August 1944.

Forfattere
Bibliotekernes beskrivelse The album features many dramatic photographs and documents, numbering over 250, from the renowned Polish Institute and Sikorski Museum (PISM) as well as from the author's collection. c 250 photos, 8pp colour profiles & ills.