- Facts, Fictions, and the Writing of History 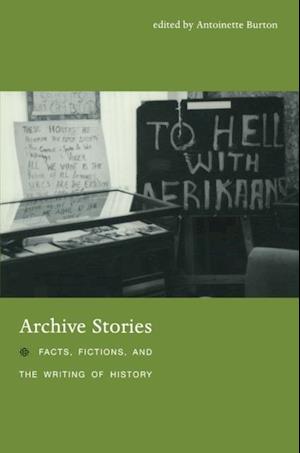 Despite the importance of archives to the profession of history, there is very little written about actual encounters with them-about the effect that the researcher's race, gender, or class may have on her experience within them or about the impact that archival surveillance, architecture, or bureaucracy might have on the histories that are ultimately written. This provocative collection initiates a vital conversation about how archives around the world are constructed, policed, manipulated, and experienced. It challenges the claims to objectivity associated with the traditional archive by telling stories that illuminate its power to shape the narratives that are 'found' there.Archive Stories brings together ethnographies of the archival world, most of which are written by historians. Some contributors recount their own experiences. One offers a moving reflection on how the relative wealth and prestige of Western researchers can gain them entry to collections such as Uzbekistan's newly formed Central State Archive, which severely limits the access of Uzbek researchers. Others explore the genealogies of specific archives, from one of the most influential archival institutions in the modern West, the Archives nationales in Paris, to the significant archives of the Bakunin family in Russia, which were saved largely through the efforts of one family member. Still others explore the impact of current events on the analysis of particular archives. A contributor tells of researching the 1976 Soweto riots in the politically charged atmosphere of the early 1990s, just as apartheid in South Africa was coming to an end. A number of the essays question what counts as an archive-and what counts as history-as they consider oral histories, cyberspace, fiction, and plans for streets and buildings that were never built, for histories that never materialized.Contributors. Tony Ballantyne, Marilyn Booth, Antoinette Burton, Ann Curthoys, Peter Fritzsche, Durba Ghosh, Laura Mayhall, Jennifer S. Milligan, Kathryn J. Oberdeck, Adele Perry, Helena Pohlandt-McCormick, John Randolph, Craig Robertson, Horacio N. Roque Ramirez, Jeff Sahadeo, Renee Sentilles