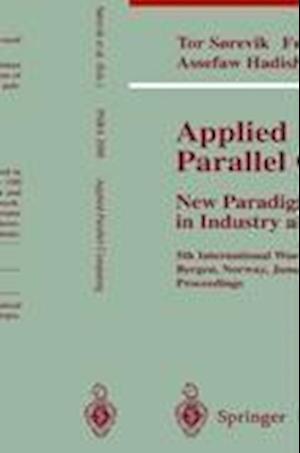 The papers in this volume were presented at PARA 2000, the Fifth International Workshop on Applied Parallel Computing. PARA 2000 was held in Bergen, Norway, June 18-21, 2000. The workshop was organized by Parallab and the Department of Informatics at the University of Bergen. The general theme for PARA 2000 was New paradigms for HPC in industry and academia focusing on: { High-performance computing applications in academia and industry, { The use of Java in high-performance computing, { Grid and Meta computing, { Directions in high-performance computing and networking, { Education in Computational Science. The workshop included 9 invited presentations and 39 contributed pres- tations. The PARA 2000 meeting began with a one-day tutorial on OpenMP programming led by Timothy Mattson. This was followed by a three-day wor- hop. The rst three PARA workshops were held at the Technical University of Denmark (DTU), Lyngby (1994, 1995, and 1996). Following PARA'96, an - ternational steering committee for the PARA meetings was appointed and the committee decided that a workshop should take place every second year in one of the Nordic countries. The 1998 workshop was held at Ume a University, Sweden. One important aim of these workshops is to strengthen the ties between HPC centers, academia, and industry in the Nordic countries as well as worldwide. The University of Bergen organized the 2000 workshop and the next workshop in the year 2002 will take place at the Helsinki University of Technology, Espoo, Finland.