- Berlin Architectures of the 1980s 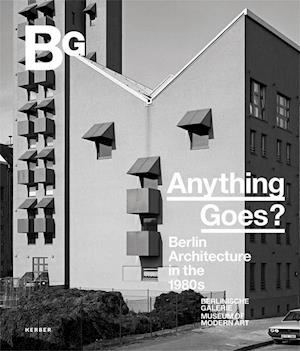 In 1987, Berlin as a whole became a laboratory for architecture. A wide range of notable buildings with a unique density was created in the East and the West in connection with the city's 750th anniversary. While the buildings were vilified at the time, they now appear as important witnesses to a "postmodern" era of building, which called the traditional architecture of the modern living environment into question. Today, the buildings have disappeared, been modified, or are threatened with demolition. For the first time, the exhibition and publication examine the significance of the architectural visions developed in East and West Berlin in the final decade before the fall of the Berlin Wall.Architects included:Hinrich and Inken Baller, Christian Enzmann and Bernd Ettel, John Hejduk with Moritz Muller, Josef Paul Kleihues, Michael Kny and Thomas Weber, Hans Kollhoff, Dorothea Krause, Rob Krier, Peter Meyer, Frei Otto with Hermann Kendel, Martin Kuenzlen and Gunther Ludewig, Manfred Prasser, Gunter Stahn, Helmut Stingl, James Stirling and Michael Wilford, Peter Sturzebecher, Kjell Nylund and Christof Puttfarken, Oswald Mathias Ungers, Solweig Steller-Wendland, and many more.

Forfattere
Bibliotekernes beskrivelse For the first time, this publication and the accompanying exhibition examine the significance of the architectural visions developed in East and West Berlin in the final decade before the fall of the Berlin Wall.