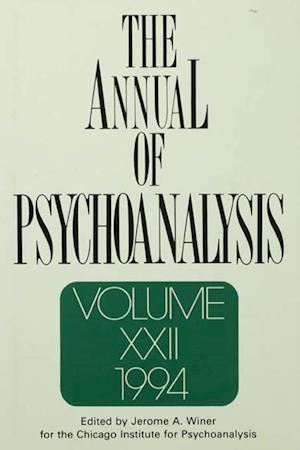 Volume 22 of The Annual of Psychoanalysis begins with the provocative reflections of Jane Flax and Robert Michels on the current status and future prospects of psychoanalysis a century after Freud. Flax believes that analysis will not survive in the postmodern West if analysts cling to the medical model and the notion of analysis as a clinical science; Michels believes analysis will be revivified in the next century by reorganizing its training institutes within universities. A section on 'Psychoanalysis and the Visual Arts' includes John Gedo's probing examination of the inner world of Paul Gauguin and William Meissner's reflections on Vincent van Gogh as artist. Johann Michael Rotmann's examination of the transferential meanings of third-party payment within Germany's health insurance system is a timely consideration of issues that are increasingly salient for American analysts and therapists. A rich harvest of theoretical and clinical papers rounds out this volume of The Annual. In 'A Time of Questioning,' Leon Wurmser responds to the inner and outer challenges before analysis in a closely reasoned defense of the applicability of classical analytic technique to severely disturbed patients. Michael Hoit examines the noninterpretive, interactive aspects of the analytic relationship, arguing that the analyst's noninterpretive activities are intrinsic to treatment and must be incorporated into the theory of therapeutic action. In 'Fables as Psychoanalytic Metaphors,' Elaine Caruth describes some psychoanalytic metaphors contained within the lessons of the Aesopian fables, proposing that the fables address interpersonal and group conflicts that often involve moral issues. Wilma Bucci offers her 'multiple code theory' as a new model of emotion and mind, based on current theory and research in cognitive science, that can account for clinical concepts and provide coherent framework for empirical research. And Ralph Roughton uses the case history of Laura to underscore the central role of repetition and interaction in the analytic process. Volume 22 will not disappoint readers of this distinguished continuing series. Like its predecessors, it is a thoroughly assembled collection responsive to the conceptual, clinical, and institutional challenges now before the field.