2014 Annual Indices For Expatriates And Ordinary Residents On Cost Of Living, Wages And Purchasing Power For World's Major Cities 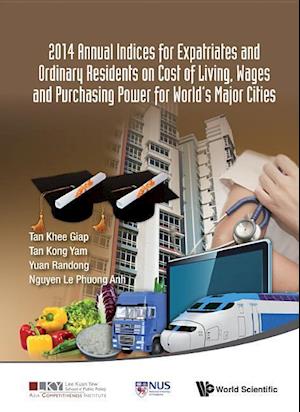 There has been broad-base growth in wealth for cities all over the world, albeit increasingly unequal within and across cities. Some cities tend to grow faster than others, especially those emerging cities in Asia. We tend to observe longer periods of economic expansions compared to downturns with increasing volatility due to external shocks as cities are also increasingly open and interconnected. Such volatility would mean a less stable macroeconomic environment for cities causing fluctuations in prices and unemployment, as well as shares between private and public consumption.Cost of living, wages and purchasing power therefore become important key benchmark indicators to track and monitor the basic living standard for cities, not just by employers and employees; they matter even more for policymakers, multinational corporations and government of the day, politically. This book is thus a valuable compendium studies on 109 major cities around the world whereby the cost of living, wage and purchasing power indices were tracked and monitored, for both average residents and expatriates, which tend to be vastly different. Annual Indices for Average Residents and Expatriates is currently the only publication that provides comparable data on cost of living across cities for both average residents and expatriates. Cost of living analysis on the latter, widely available in published works, is often mistaken or confused as on the former! This book provides a tool to analyse questions of the differences in the cost of living in cities across the globe between ordinary city dwellers and professionals who work abroad.