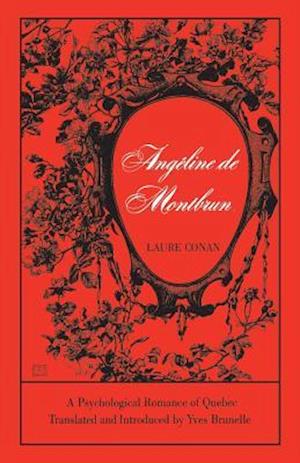 Laure Conan was the first woman novelist in French Canada and the first writer in all Canada to attempt a roman d'analyse. As she refused to have her true identity revealed, the author of the preface to her book, Abbé H.-R. Casgrain, made a point of confirming that it was indeed a woman hiding behind the pen-name. Her daring in writing a psychological novel was 'forgiven' because she was a woman, and her anticipating the trend towards this type of novel was attributed to 'that intuition natural to her sex.'

In Angéline de Montbrun, Laure Conan broke with what has been called the 'collective romanticism' of nineteenth-century French-Canadian land, with the rural myth, the exhortative tone, and the vast canvas. These concerns  are basically absent in her work. Further, she eschewed the details of adventure and intrigue, the wooden, predictable characters, and the transparent intricacies of romantic love in favour of writing about the inner turmoil of an individual, live character, a young woman caught in a complex web of human appetites, aspirations, and relationships. Because of the novel's realism, one of the most persistent topics of discussion about Laure Conan has been whether or not Angéline de Montbrun is autobiographical. Recent studies indicate it may be. In any case, Angéline was the most complex character in Canadian fiction to 1882 and for some time to come.

Traditionally, Angéline de Montbrun was regarded as a novel of Christian renunciation, and Angéline as the most holy of heroines. For a long time no one went too deeply into the relationships between the characters, but in 1961 Jean Le Moyne bluntly stated that 'the lovers in the novel are not Maurice Darville and Angéline, but M. de Montbrun and his daughter.' Since then there has been a proliferation of interpretations and psychological studies of the novel, and there is no going back to the simpler view of it.