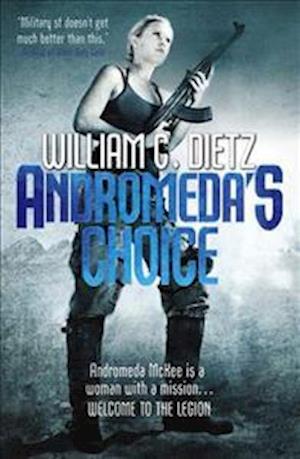 In the wake of a bloody coup that claimed the lives of her entire family, Cat Carletto sought refuge in the violent embrace of the Legion of the Damned - the most fearsome fighting force in the Empire - and was reborn as Andromeda McKee. After less than a year in the Legion, battle-scarred Andromeda is summoned to Earth to receive the Imperial Order of Merit from the empress herself. When she learns of a resistance group determined to overthrow Ophelia, she must choose between her conscience and her desire for vengeance. "Nail-biting military action adventure." The Guardian "Intrigue, danger, and page-turning battle sequences." SF Signal "The action rarely lets up...A page turner." Kirkus Reviews "This book will capture the imagination and heart of any reader as they follow this heroine on her quest for revenge. A superior work. Highest possible recommendation." SciFiPulse "The battle scenes are numerous and thrilling; the world feels immersive and authentic; and our heroine is a tough-as-nails badass." RT Book Reviews

Forfattere
Bibliotekernes beskrivelse Andromeda McKee rebuilt her life in the violent embrace of the Legion of the Damned in the days when cyborgs were first being introduced. Summoned to Earth, Andromeda learns that she isn't the sole surviving Carletto - her uncle Rex is the leader of a resistance group determined to overthrow Ophelia.